We all know the basics of nitrogen in plants. The good and the bad. Every grower and student knows nitrogen is important for good looking healthy plants.  Too much nitrogen and you get dark green vigorous growing vegetative growth, too little and plants show smaller leaves but it seems that there are more flowers and reproductive organs tend to go into overtime to ensure the survival of the specie.

Let’s start looking at nitrogen right from the start of the cucumbers life. I tried to keep each section as short as possible.

Since cucumbers are tropical soft tissue plants, they do not grow well in low temperatures.  Ideally the root zone should be between 20-30°C (68-86°F). QIUYAN YAN et al (2012)1) QIUYAN YAN, ZENGQIANG DUAN, JINGDONG MAO, XUN LI & FEI DONG (2012). Effects of root-zone temperature and N, P, and K supplies on nutrient uptake of cucumber (Cucumis sativus L.) seedlings in hydroponics, Soil Science and Plant Nutrition, 58(6): 707-717. did an interesting study with cucumber seedlings and N, P & K fertilization. They found that total dry weight is lower at lower temperatures but increasing nitrogen will increase total dry weight of the seedling. However, P and K did not have the same effect on dry weight.  So, adding more P and K does not increase dry weight of the seedling at low temperatures.  Rather add some N.  Low root temperature ±10°C caused a remarkable reduction in total N, P, and K uptake of shoots and more nutrients were accumulated in roots at ±10°C than roots at ±20°C.  This means that all the nutrients you are trying to add to the plant stays in the roots rather than go up into the above soil part of the plant. Low root zone temperatures showed little variation in nutrient content with fertilizer treatments while with higher root zone temperatures higher fertigation resulted in higher nitrogen.

This basically means that if the temperature drops in the seedling house, don’t reduce nitrogen application too much. The roots accumulate nitrogen and as soon as the temperature increases again there is enough nitrogen available for immediate translocation to stems and leaves.

It is quite possible to reduce the ammonium uptake in the roots with Cu2+ addition. However, ammonia starts to accumulate in the roots due to the inhibitory effect of Cu2+ on important enzymes such as glutamine synthetase and NADH-glutamate dehydrogenase. (BURZYÑSKI et al, 1997)3)BURZYÑSKI, MAREK, AND JÓZEF BUCZEK. 1997. The Effect of Cu2 on Uptake and Assimilation of Ammonium by Cucumber Seedlings. Acta Physiologiae Plantarum 19(1): 3-8. doi:10.1007/s11738-997-0015-8.

There are situations where some ammonia is beneficial to plant growth. It is possible when polluted water is used with high levels of sediment (such as bore hole water), the pollutant or toxin in this case, Phenanthrene, can reduce nitrogen uptake. Phenanthrene is a ubiquitous, persistent organic pollutants commonly found in soil and sediments.  So basically, ammonium nutrition could provide a useful tool to improve the growth and adaption of plants under pollution (phenanthrene) stress. (YANG et al, 2012)4)YANG, XINPING, SHIWEI GUO, LINGLING GUO, and CHANGZHOU WEI. 2012. Ammonium Enhances the Uptake, Bioaccumulation, and Tolerance of Phenanthrene in Cucumber Seedlings. Plant and Soil: An International Journal on Plant-Soil Relationships 354 (1-2): 185-195. doi:10.1007/s11104-011-1054-x.

It is a fine balance between the three big factors growing hardened good quality cucumber seedlings.  Well any seedling for that matter. Light (quality and length), temperature and nutrient supply (especially nitrogen) will affect the growth rate of any seedling.

So, what else can a grower do to take advantage of priming cucumber seeds at low temperatures, except drinking more coffee and waiting. First, it has been found that root zone temperature has a greater effect on seedling growth than adding nutrients. N was the most effective between P and K nutrient sources in stimulating growth (YAN, Q et al, 2012)5) PIRI, M., M. B. MAHDIEH, J. A. OLFATI and GH. PEYVAST. 2009. “Germination and Seedling Development of Cucumber Are Enhanced by Priming at Low Temperature.” International Journal of Vegetable Science 15 (3): 285-292. doi:10.1080/19315260902944859..

The growth medium in which the cucumber seedlings are grown is only there to keep it upright and not wander away in the nutrient solution. The longer it is kept in any growth medium, the more complex the effects become due to the interactions between bacteria, growth medium, oxygen levels and nutrient content.

In my opinion, the more inert and sterile the growth medium is, the better. It just means there is less dynamic change over the growing season that a grower must consider.

Nitrogen accumulation tends to increase the pH of the growth medium due to release of Hydroxide ions and bicarbonate. Interestingly, if the main supply of nitrogen is ammonium, then the pH of the growth medium will decrease.  So, the amount or concentration of nitrogen has an effect on pH and the pH has an effect on absorption of other elements. Talking about a complex dynamic.

Nitrogen and the mature cucumber plant

To fully understand why it is so important to keep nitrogen levels optimized in the nutrient solution and root zone we must look at the rate of distribution and use throughout the plant. The average nitrogen absorption rate was 181-196 mg.plant –1 per day.  This is during first fruit harvest and will increase depending on the number of fruit on the plant and pruning method.  TANEMURA 2008 7) RYOTA TANEMURA, HIROSHI KURASHIMA, NORIKUNI OHTAKE, KUNI SUEYOSHI & TAKUJI OHYAMA (2008) Absorption and translocation of nitrogen in cucumber (Cucumis sativus L.) plants using the N tracer technique, Soil Science and Plant Nutrition, 54:1, 108-117. http://dx.doi.org/10.1111/j.1747-0765.2007.00213.x did and interesting study on the translocation of nitrogen from first fruit harvested to 16 days thereafter.  It seems that the nitrogen in the fruit was the only component that showed an increase in nitrogen concentration. All the other components such as leaves, stems and roots showed a decline in N. Indicating that the plant gives priority to the fruit during this stage. That is why any N deficiency at this stage will have a significant influence on cucumber yield. 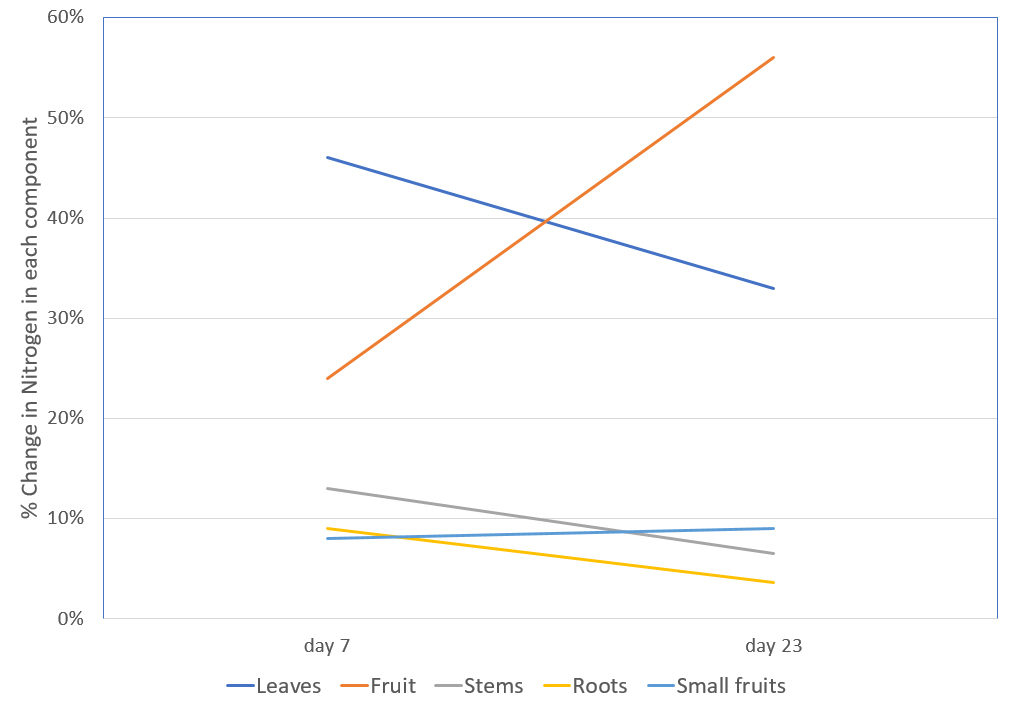 The percentage change of nitrogen in cucumber fruit from first fruit harvested until 23 days later. Only the concentration of nitrogen increased over this period while other components decreased.

I have discussed the basics of cucumbers fertigation in another post awhile ago.  The basic concentrations of each element can be found in the table below which i think is a good starting point.

The ideal nitrogen concentration is not so simple to calculate as there are many factors that will influence the fertigation program. For instance:

I am sure some people will be able to think of more factors and there are, but these come to mind. The best is to work from a starting point. Get a fertilizer program from a reputable fertilizer company in your area that has provided programs to other growers in the area that work. it might take a couple of years to optimize but experience is the only way to get it right.  Even as far back as 1979 the importance of environment, growth media, varieties etc. was noted by WITTWER & HONMA (1979) 8)WITTWER, H.S. & HONMA, S. 1979. Greenhouse Tomatoes, Lettuce and Cucumbers. Michigan State University Press. ISBN: 0-87013-210-5..

The nutrient content of water soluble hydroponic fertilizers is not always clearly indicated on packaging.