How to grow spinach hydroponically

Spinach or Spinacia oleracea L. belongs to the Chenopodiaceae family.  The Chenopodiaceae family also includes crop such as beet (Beta vulgaris L. subsp. vulgaris) and chard (swiss chard: Beta vulgaris L. var cicla: Ulrich) The most will known swiss chard variety among growers is Ford Hook Giant.  Most people regard swiss chard as actual spinach.  There is a subtle difference.  Swiss chard have larger and harder leaves with large white veins while the real spinach have softer and smaller leaves with green soft veins.  There is no need to remove the stem and veins from spinach, however, most people remove the veins from swiss chard.

The spinach referred to in this article is not a true spinach, it’s from the family of beet root. It is not baby spinach.

Below the difference between baby spinach and swiss chard spinach.  Baby spinach leaves are softer and smaller.  The stems never get hard so they are also cooked.  Baby spinach can be planted up to 100 plants/m² (±10 plants/ft²).  Baby spinach is more difficult to grow as it is sensitive to heat and water stress. 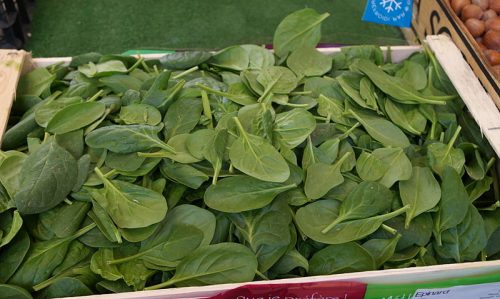 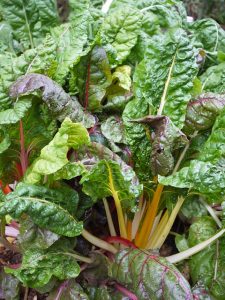 It is one of the easiest crops to grow and there will always be a market for the product3)Singh, Raj & Upadhyay, Sushil & Diwakar, Aggarwal & Sharma, Indu & Affiliation, Nupur. (2020). A Study on Hydroponic Farming System of Wheat, Spinach and Sword Lily for Sustainable Development of Agriculture. Bio Science Research Bulletin. 35. 58-63. .  Recently there has been significant developments in the development of varieties.  This has helped the grower to penetrate various other specialized segments of the spinach market.  Some spinach varieties have very soft leaves (especially baby spinach) that it is often used in salad mixes which was previously not possible due to the hard and thick leaves of chard. 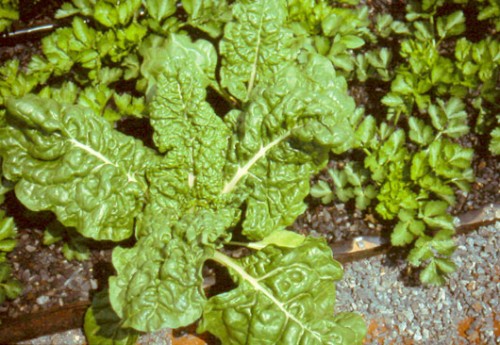 Common chard or also known as spinach. Notice the white stem of the leaves that is typical of chard type spinach. 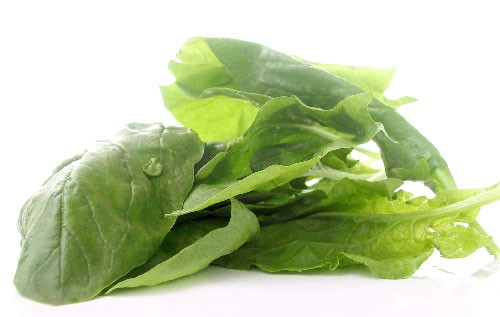 Baby spinach. Leaves are much smaller and softer and the stem is not white. Baby spinach must be packed in plastic packets otherwise they wilt very quickly.

Spinach are hardy plants that will grow in variety of climatic conditions.  It is one of the few crops that can be grown successfully during summer and winter.  Most spinach growers use a closed hydroponic system to grow their spinach.  These systems have a 1m wide bed with a divider in between resulting in two channels of approximately 0.5m each.  The planting density varies between 8 and 16 plants/m2, while baby spinach can reach densities of up to 100 plants/m2.

The planting density will depend on factors such as:

Growers tend to plant at the highest densities possible without investigating the effect on plant growth and quality of the final product.  Quite often the microclimate of the area, influences the options a grower may have.  A classic example are weeds.  If the system is located next to an open field where there are a lot of weeds and indigenous plants, the insects of these plants tend to migrate over and increase the insect populations of the crop.  In this case one should plant at lower densities in order to achieve more effective control of the insect populations.

It could be said that the optimum planting density for swiss chard is between 10 and 12 plants/m2 and for spinach between 12 and 14 plants/m2.  Baby spinach will vary depending on the type of growth medium used.  Finer crusher stone will allow higher densities, however, make sure that the gradient is steep enough to ensure no build-up of water (puddle forming, thus attracting fungus gnats).  The disadvantage of using finer stone/gravel is that when removing the plants at the end of the season, the smaller stones tend to tangle tighter in the roots of the plant.  The finer stone/gravel must be topped up more often that courser gravel (10-13 mm diameter gravel).

The same pattern can be used as with lettuce when planting in gullies.  When planting in bags it is best to plant only one plant per bag.  Many growers follow a summer crop such as tomatoes, cucumbers and melons with a spinach crop. The seedlings or seed are planted directly into the bag.  Often the previous crop is not even removed in order to save time and costs.  When the previous crop is removed it is advisable to add at least 50mm of new growth medium such as sawdust or sand.  Most farmers that do not have heating in their greenhouses or those using shade cloth as protection use this method of intercropping.  It is important to remember that a fast growing crop should be selected and lettuce and spinach are ideal for these situations.

Spinach can be planted directly (with seed) or seedling transplants.  In hydroponic systems it is best to transplant seedlings.  Planting spinach as seed reduces the growth season length due to wasted time used by the germination period which is not productive.

Planting either through seedlings or seeds, the seedlings must be thinned out.  The reason is it is very difficult to separate or sometimes distinguish two separate seeds clinging to each other.

In order to achieve high quality produce at the market, spinach should be treated during and after harvesting the same as lettuce.  Harvesting should be done in early morning or very late afternoon.  Place the harvested product in a cool place.  Ideally one should have the building, where the sorting and packing is done, cooled down and humidity increased.  This will ensure crisp leaves at the market.

Chard reacts to nitrogen fertilizer extremely well.  Adding to much results in large, hard white veins that reduces the quality of the product.  Although high yields will be achieved, the marketable component is extremely low.  The nitrogen level is a balancing act in which the variety and climate must be taken into account.  Growers often tend to add too much nitrogen to spinach and baby spinach.

Spinach, especially chard, can be grown with a tomato nutrient program without any significant yield losses.  The ideal would be to grow spinach with another leafy crop such as lettuce or leeks.

The EC should be maintained between 1.8 and 2.3 mS.cm-1.  During colder periods the EC can be slightly higher but during high temperatures it is important not to let the EC go above 2.0 mS.cm-1.  It is estimated that a swiss chard plant uses up to 450ml of water per day (fully grown with mature leaves on the plant).

Below is a general fertigation recipe for spinach. All values in ppm or mg.L-1.

The registered chemicals, as published by the National Department of Agriculture of South Africa (1999), that can be used on spinach are

These guidelines must be followed to control most insects and diseases found in hydroponic production systems.  You need to establish which chemicals are registered for your country and area. 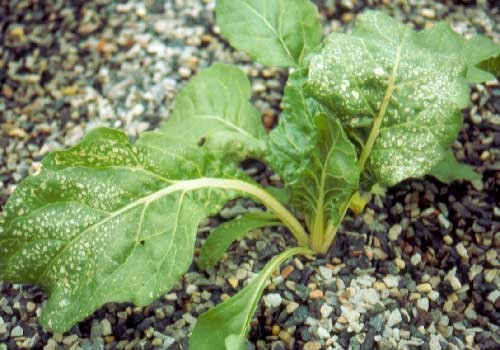 Chemical spray damage on lettuce leaves. The concentration of the fungicide was too high so the epidermis of the leaf dried out

Physiological disorders is not a big problem with spinach because the leaf growth season is so short, even more so with baby spinach.  The most common physiological disorders I have found tend to be effects from chemical sprays. If they do occur, it is found on the most mature leaves. These can be removed and you will have to wait until the younger inner leaves are ready for harvest.

The outer leaves of spinach or chard is removed every week or two weeks once they are the size that your market requires.  The length of time that a plant can be harvested will really be determined by your market.  As the plant gets older, the base gets thicker and a larger more prominent white stem forms. For a lot of markets this is not acceptable, but for class 2-3 spinach it will be accepted.  Depending on the variety and climate, you should be able to get 12 weeks of continuous harvesting.

In the case of baby spinach it is different.  Succulent soft leaves is what makes them sell. Harvesting wisely without over extending the plant is crucial. Some varieties grow so fast that you can harvest the whole plant at once. In this case good planning and staggering your planting is crucial but is also very labour intensive.

It is not recommended that spinach, baby spinach or swiss chard be stored for longer than three days.  If there are no other options, spinach leaves can be stored using three methods:

Before storage, all excess water should be removed in order to reduce decay.  Ensure that harvested spinach is below 22 °C before storing.  If the leaves are harvested during warm days it should be cooled with ice cold water.  Adding chlorine to the water will reduce the development of decay.  Storage time can be extended by increasing CO2 content of air to 10 %.  Ideal storage temperature is between 2 °C and 10 °C.

Marketing of spinach – and how it changes (Important, read !!!)

Spinach is one of the very few crops that change physiologically during its growth season in such a way that your target market can change. Initially the stems are nice and thin, leaves are soft and visually the spinach looks good. In most market segments, people will cook the whole leaf, including the stem. See the image below and compare it to one of the first images.

As the plant gets older, the stem thickens, becomes harder and the leaves more ‘rubbery’. The white base of the stem becomes much wider, up to 5cm (±2 in), the leaf vines also become more prominent and harder (woody).

Young spinach is best sold in pillow packs.  Most part of the stems are removed for better presentation.  Once the spinach gets a little older, they are bunched together with an elastic band  their stems, just like fresh flowers. 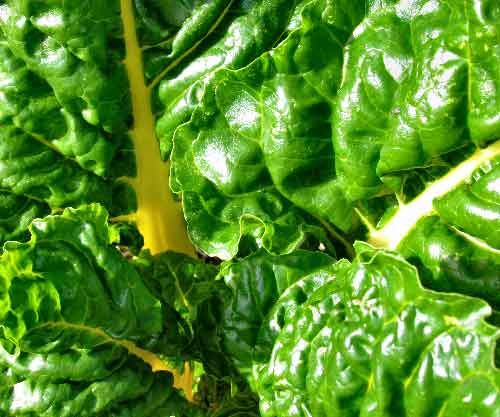 Mature spinach plants with thick stems. Compared to a young crop, these will have a different market segment and price obtained will be lower.

12 thoughts on “How to grow spinach hydroponically”