The effect of radiation on growth and yield

Understanding the effect of radiation on plants will help identify weaknesses in your greenhouse.  The effect of radiation can be divided into three parts; its effect on flowering, on photosynthesis and the temperature and water loss. High light intensity is correlated with temperature and water loss. Flowering is determined by illumination levels less than 10.9 lux (1 fc-c or about 0.043 Wm–².

Plants are sensitive to changes in the environment. The plant is the best environmental indicator despite the many technological tools available. No matter where a plant is grown it is affected by the following incoming and outgoing radiation:

Theoretically any passionate scientist can stretch the list further to satisfy his point but I think that is enough, even for me. Real life application of the effect of radiation is as follows; in winter when the greenhouse roof is cold, thermal energy will leave the plant with the effect of lowering the plant’s temperature. If the evaporative pad is off in dry climates and the exhaust fans bring in dry wair, water loss can increase with more solar energy being used to evaporate water. The plant temperature will be a summation of all incoming and outgoing radiation. With these many variations, one can appreciate why a particular plant reaction might be different from what is expected.

Greenhouse crops can be examined on different levels of sophistication. A microbiologist examines single cells, the physiologist observes certain reactions of a leaf and an anatomist may examine a particular organ. A home gardener may water a single plant. Much practical research has resulted from these studies, but they often fail to explain the reactions of thousands of plants. the grower deals with populations and his level of complexity is much higher. A hectare of plants growing close together requires more light, more water and more carbon dioxide etc, and the crop response is often different than that of a single isolated plant. 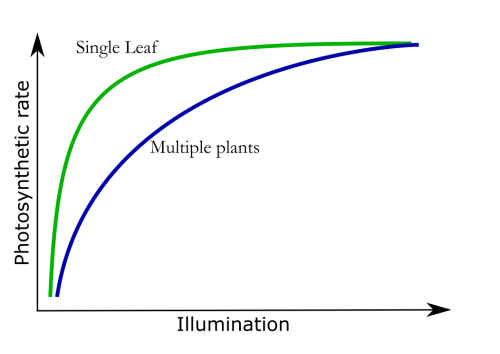 Photosynthesis is influenced by several environmental factors. The use of all available solar energy for photosynthesis is not always possible because factors such as carbon dioxide levels, water availability and nutrient supply may impose limits, not to mentions the effect of bacteria and fungi. A grower must trey and achieve the best balance of all factors to achieve quality and yield. In some cases factors of production may be limited as a matter of economics. A common example is the use of salty irrigation water, which, white it reduces growth, is feasible as better water would be very expensive. The lateral thinker will realize there are nutrients in salty water for which you don’t have to pay, nature has provided it for free. It might be polluted water, then other companies have paid for it already.

The effect of high intensity radiation on plant growth in greenhouses.

High intensity radiation is more common in equatorial regions than cold weather climates. This is