Installing a sump on small closed hydroponic systems is also easy. The same basic concrete sump can be build but a simple ‘T-piece’ as described in the figure below can also be as effective. However, floating particles in the water will not be removed with this method. The water in the ‘inline sump’ must not move too fast. Install a T-piece that is set at an angle in the direction of the water flow. This will further increase the efficiency of the ‘inline sump’. A “U” shaped section can also be installed in line with a gate valve at the bottom to remove sediment. 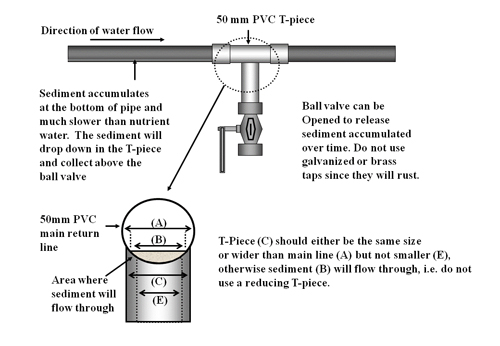 Lettuce was cultivated in 4500 B.C. in the Mediterranean basin. Only in 1543 was the

We use cookies to ensure that we give you the best experience on our website. If you continue to use this site we will assume that you are happy with it. Please read our Privacy Policy. We will remind you again in a months time.OkRead more