This physiological disorder looks like a typical fruit disease. The symptoms generally occur at the blossom-end of the fruit and begins with a light tan, water soaked lesions, which when enlarged, turn black and leathery. As in tomatoes and watermelons, blossom-end-rot usually appears when the fruit is about half-grown The affected areas first may consist of one or more small water-soaked spots, or they may cover half the fruit. These spots soon become dry, light coloured and papery. Later, affected areas are attacked by various fungi that grow over the dead tissue, darkening it.

This disorder is usually associated with a localized calcium deficiency in the distal end of the fruit resulting in blossom-end rot. It is not a direct cause of Ca deficiency in the root medium, rather a lack of co-ordination between the transport of assimilates by the phloem and Ca by xylem during rapid cell enlargement in the distal placenta tissue (put simply, the fruit grows faster than what Ca is transported to the areas where it is needed). Climatic changes have a significant influence in the development of blossom-end-rot (BER) but genetic susceptibility is also a major cause of the disorder. Inadequate calcium levels in the nutrient solution can contribute to blossom-end-rot. Low pH can cause blossom-end-rot as well, especially when coupled with water stress conditions.

Calcium is not a highly mobile element and can easy occur with even short periods of water supply fluctuation. Moisture extremes promote the likelihood of this disease and rapidly growing plants are more susceptible. Conditions, such as with high salt concentrations or the use of ammonium based nitrogen might prevent the proper uptake of calcium. High relative humidity might also reduce calcium uptake. There is a correlation between calcium and boron in meristematic tissue of the roots. Low boron concentrations can reduce the uptake of calcium. Check the boron concentration in the water (at root level, not in fertilizer tank).

Cultivars differ in their tolerance to this disease. Proper water control and fertilization can prevent blossom-end rot. If blossom-end rot occurs during the growing season, apply a calcium based foliar spray. Proper water/nutrient analysis should be done beforehand to determine your nutrient status and to fertilize accordingly. 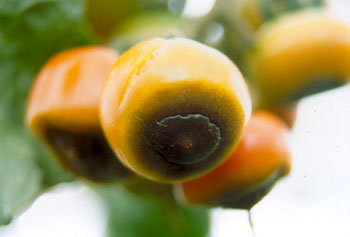 The most common physiological disorder in vegetable fruit grown in hot climates. Not always a direct cause of low calcium, but more climate induced reduction in calcium absorption. The best first defence to this disorder is selecting resistant varieties.