What is the optimum gravel depth for hydroponic channels

The correct gravel depth is important for the development of the roots system. Too shallow gravel will not only restrict root development and volume, but will also cause the development of algae on the surface of the gravel. The algae attract fungus gnats which feed on the roots of plants. The reason why the gravel should be at least 50 mm in depth is to prevent the formation of the algae layer. Just above the nutrient solution layer, which should be approximately 5 mm thick, the air is saturated with moisture and oxygen. This layer moistens the gravel on which the root hairs of the plants absorb nutrients. If the gravel is to shallow, algae feed on the nutrient rich moisture. If however the gravel is at the correct depth, light does not penetrate to where the gravel is moist and algae cannot grow. Over long periods a thin white powder might form just below the top layer of gravel. This is a salt layer and does not influence the plants. It can be washed with clean water.

The growth media, in this case gravel, used in channels or gullies of an open hydroponic system must provide enough volume for the roots to grow. Trying to save on shallow channels creates an ideal environment for algae and fungus gnats that feed on the roots of the plants. In some cases gravel depth is adequate but flow rate of the water is too high, which can cause the same problem. 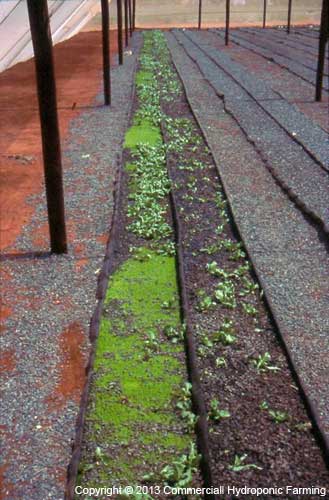 Lettuce was cultivated in 4500 B.C. in the Mediterranean basin. Only in 1543 was the