The effect of light and temperature in plant growth (Advanced reading)

Light and temperature are two crucial factors in greenhouse hydroponics. Plants use a very small range (only about 5% of visible light) in the total spectrum that is found in the atmosphere. The rest of the incoming radiation is not used in photosynthesis or for any chemical growth process. The range that a plant uses in photosynthesis is called Photosynthetic Active Radiation or PAR. It is PAR that is the most important and where a growers focus lies. But we cannot always change PAR without affecting the other spectrum of radiation as well.  So it is important to understand radiation, where it comes from, in what form and how it will affect the quality and quantity of a crop’s yield. It is interesting to note that the maximum conversion efficiency of light to photosynthesis is 20%.  But that was in lab conditions.  Under normal conditions in full sunlight and enriched CO2, the efficiency is about 4% but in field conditions it never goes above 2 %.  Higher conversion efficiencies than 2% can be achieved by manipulating radiation (light) inside a greenhouse for optimum results.  All radiation waves can be reflected and diffused in order to maximise PAR and minimize the negative effect non-PAR.

Quality of radiation may be different inside the plant canopy (between plants). As the sun moves across the sky, different parts of the greenhouse will be irradiated at different times of the day, and the time when this occurs is often important. If no other factors are limiting, growth rate will usually be the highest with maximum sunlight. Sunlight is the single most important factor limiting greenhouse production. Managing sunlight for maximum PAR will result in optimum yields.

Be careful for sudden changes. Plants cannot react to sudden climatic changes.  The light requirements vary with species, stage of growth and previous history.  If two identical plants are placed in different environments for a period (for argument sake a month or two), and then both returned to the same conditions, they will not respond the same.  Plants pre-conditioned to high light will perform better under the same conditions. The same applies to plants conditioned to low energy levels.  These responses may be expected if the environmental factor is a different watering treatment, fertilizer application or mix or carbon dioxide level.  Previous history becomes a very important factor when a problem is being diagnosed. This is also why so many people say that recording as much as you can will help with later diagnoses of problems.

So what happens with the other 95% of radiation that is not used in photosynthesis. The rest of the radiation does not go through the plant, it does have an influence and the remaining energy of the radiation is eliminated through

The principle way a plant reduces heat is by water loss (evaporation). It does that through the opening of its stomata. So 70-90% of available sunlight is utilized by releasing water through a gas. Any environmental factor that forces the closure of stomata will result in an increase in plant temperature.  So the rate of water loss has a direct relationship to the amount of sunlight the plant receives, be it in a greenhouse or outside. So water loss will follow a curve closely related to a curve for solar energy.

The rate of water loss has a direct relationship to the amount of sunlight.

If the demand for water exceeds supply, the plant wilts. Interestingly, a greenhouses with few plants, or incomplete cover, are likely to be several degrees hotter even with maximum ventilation. So a good crop cover will help in reducing radiated heat from the soil which is higher than radiated heat from plants.  That is why many growers cover pathways with white plastic, to reduce heat radiation and to increase PAR radiation from the white plastic. 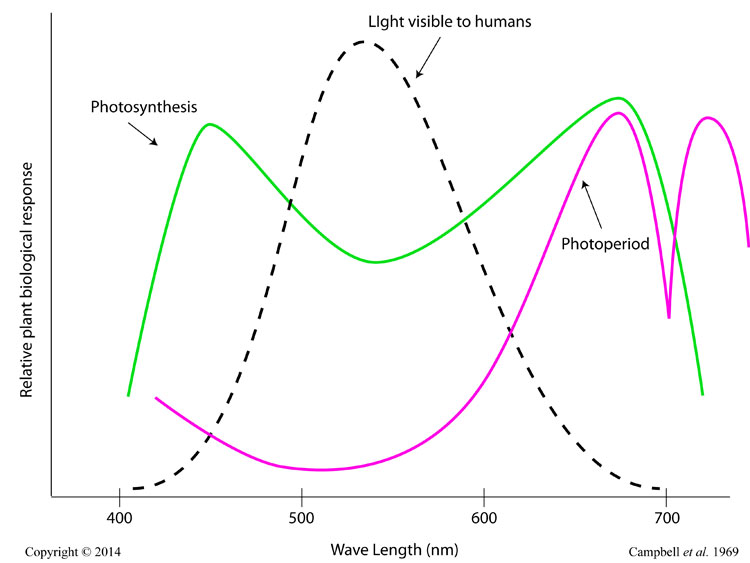 The relative biochemical response to various wave lengths of a plant. Note that humans are most sensitive between 500-600 nm. Plants show photoperiod reaction to wave lengths above 700 nm, which is also the limit to what humans can see.

Radiation is a series of waves each having a given amount of energy depending on its location in the spectrum.  Remember that light is radiation and is part of this spectrum. The location of in the spectrum is determined by the number of waves in a given distance or by determining the length of the wave between two identical points i.e. its wavelength and is measured in nanometers (nm).

What is important about light is that it has a certain amount of energy. This amount of energy can be calculated if we know the wavelength. As the wavelength decreases, the energy decreases.  It is this energy that the photosynthetic process in plants need to produce food.  The problem is a plant cannot be selective in the range of wavelengths that reach it’s leaves. The total range that reaches a plant is measured by a light meter in either Lux, Foot-candles or Lumens. More modern instruments use the SI unit µEinstein (m-2s-2). Direct sunlight provides ±1200µE.   These meters measure the amount of radiation that reaches the sensor that can be seen by the human eye, i.e. visible light. Remember, light is visible radiation.  Plants do not respond to “light”, they respond to “radiation” which may be at wavelengths that humans cannot see.

Most of the radiation comes from sunlight.  The amount will depend on:

More than half of all solar radiation is at wavelengths longer than 700 nm and it peaks at 1000 nm. Although much of solar radiation cannot be seen, it has a significant effect on plant growth. Some parts of radiation is used for photosynthesis and others photoperiod.  For instance photosynthesis efficiency is at its best between 400-500 nm (between blue and green light) and then decreases between 500-600 nm (between green and yellow).  Peak is again between 600-700 nm (between yellow and far red, but not infrared).

So what effect does radiation have on growth

Radiation has an influence on the following: 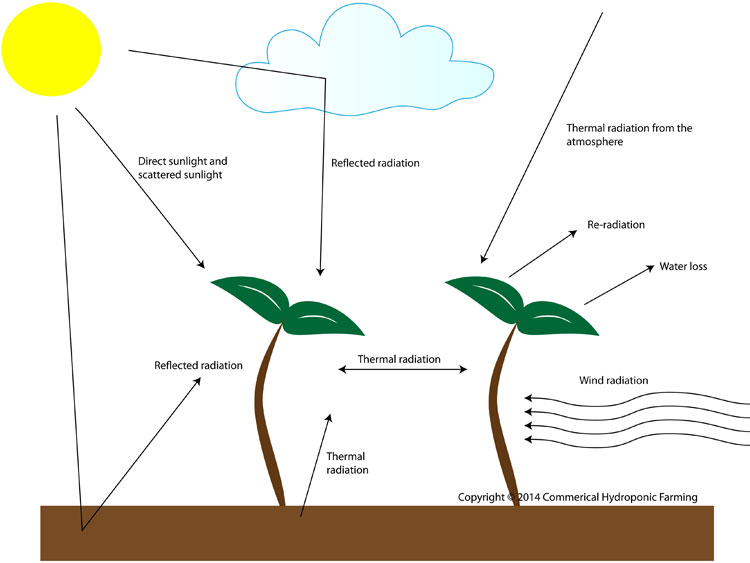 The various sources of radiation that affects a plant. Light is a component of radiation, so understanding where radiation comes from will help building a better environment throughout the year.

Photosynthesis and water loss is usually associated with high light intensity and flowering can be affected by changing illumination levels less than 11 lux.

The plant is the best environmental indicator for the observant grower.  The first thing good growers do is to look at the physical health of their plants and then to adapt their environment accordingly.

In order to understand and control or adapt the plant’s environment, you have to understand how radiation works. For instance, a cold roof will result in thermal energy release from the plant thus decreasing plant temperature.  That results in slower growth.

If you switch the evaporative pad of in a dry climate but leave the fans on, dry air will be forced into the greenhouse, decreasing humidity and increase water loss on plant level.

The plant temperature is the sum of all incoming and outgoing energy at any point in time. Quite often we don’t understand why a plant reacts the way it does, because we don’t fully understand all the affects the environment has or we don’t understand how to control the plant’s environment.  One can never evaluate a single plant or single leaf to base your decisions on, the plant environment as a whole should be taken into consideration before making any changes or assuming something is wrong.

Previous Post
Increase container size for higher yields early in the season
Next Post
What is nutrient conditioning?

The effect of high intensity radiation on plant growth in greenhouses.

High intensity radiation is more common in equatorial regions than cold weather climates. This is